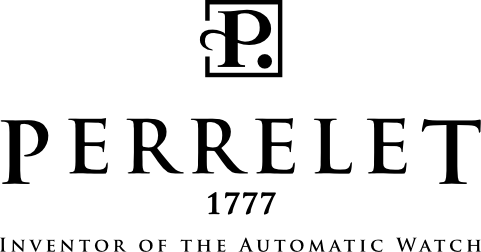 Passion, know-how, and enthusiasm are the key-words echoing around the corridors at Perrelet. In 1777, in those days, when Abraham-Louis Perrelet completed his invention of the automatic movement, it was precisely these qualities that inspired him, too.

As heir to an invention that today vibrates in every automatic watch, Perrelet holds the movement at the heart of its priorities. The House patented its exclusive module, the Double Rotor, in 1995. This calibre (Perrelet P-181) has automatic winding and enables one to observe the two rotors, one on the dial side and the other on the movement side. On the base of the latter, Perrelet created its emblematic model – the TURBINE. As the Brand’s very own true speciality, the Turbine continues on the crest of its wave with the arrival of the TURBINE XL.

A completely unrestricted progression, but remaining never-theless totally coherent. Bold, intuitive and with its own distinctive style, the new TURBINE XL is free to fully assume its role in its generous 50mm diameter case. It breaks with the Brand’s classical models and distinguishes itself as the tornado of this year end.

Its powerful, racy case has undergone a meticulous development. Its concave form and the perfect integration of its crown preserve the original inspiration derived from the aeronautical sector. Four grooves rise up the side of the middle case as if cupping the (Diamond Light Coating) DCL-treated steel bezel. In order to ensure the optimum maintenance of the natural rubber bracelet, a central support has been added between the horns, perfecting the model’s aesthetic finish. The sapphire caseback and the different material combinations ensure the seamless continuity of the collection.

Connoisseurs, lovers or neophytes in search of an exceptional timepiece will be swept off their feet immediately. Three executions are proposed: in DLC steel; more sporty in titanium/DCL steel; or the original combination of the limited 77-piece series, in pink gold/DLC steel.

On the dial side, the double rotor is stunning with its exceptional proportions. The 12 blades of the turbine have been finely honed and trimmed at an angle. For this watch of exceptional character, Perrelet offers 3 dial designs: a classical version in black and white; or for the more audacious, two coloured versions: one orange and black, the other green and black.

Ergonomically impeccable with a resolute presence and an astounding impact, the TURBINE XL, whose originality is its extravagance, is an experience to be lived!